Are you yearning to write software that really matters to your users, software that does more than line corporate pockets and all too often turn into soul-grinding work? That was my problem, and I solved it in an unexpected way - going to working for the French government's innovation programme of "State Startups".

Government innovation may sound like an oxymoron. In the 2010 O'Reilly book Open Government Matthew Burton wrote: 'In recent years, the government has become almost completely dependent upon contractors for information technology (IT). So deep is this dependency that the government has found itself in a position that may shock those in the tech industry: it has no programmers of its own; code is almost entirely outsourced. (...) On top of keeping the government from innovating, the dependence on contractors hurts the country in much more tangible ways.'

This talk is about how one small part of France's administrative machine managed to reinvent the world of government IT work, and where we plan to go from there. 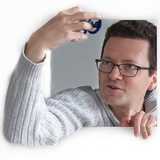