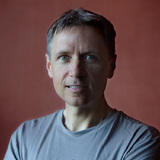 Spanning academics, business and the arts, Raffaello D'Andrea's career is built on his ability to bridge theory and practice: He is Professor of Dynamic Systems and Control at ETH Zurich, where his research redefines what autonomous systems are capable of. He is co-founder of Kiva Systems (acquired by Amazon in 2012), a robotics company that revolutionized material handling by deploying thousands of autonomous mobile robots in warehouses.

He was the faculty advisor and system architect of the Cornell Robot Soccer Team, four time world champions at the international RoboCup competition. He recently founded Verity Studios, a company developing a new breed of interactive and autonomous flying machines. In addition, he is a new media artist with exhibitions at various international venues, including the Venice Biennale, Ars Electronica, the Smithsonian, and the Spoleto Festival; his work is in the permanent collections of the National Gallery of Canada (Robotic Chair, Table), the FRAC Centre in France (Flight Assembled Architecture), and the Heinz Nixdorf Museum in Germany (Blind Juggler).

Other creations and projects include the Flying Machine Arena, the Distributed Flight Array, the Balancing Cube, Cubli, the Actuated Wingsuit, and RoboEarth.