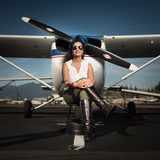 Rocket scientist and expert on the future of transportation; responsible for the landing of the Mars Curiosity Rover

Dr. Anita Sengupta is a true rocket scientist. She is here to tell about the future of flight.

Would you like to know how to make flying CO2 neutral from the person responsible for landing the Mars rover?

Would you like to know how to make a hydrogen fuel cell powered aircraft from a TEDx speaker and professor?

At GOTO Copenhagen, she will tell her breathtaking story about how she modifies existing airplanes to fly on seawater through her fast moving startup, Hydroplane Ltd.

Dr. Anita Sengupta worked for NASA for 16 years where her engineering projects included her PhD research on developing the ion propulsion system for the Dawn Mission (currently in the main asteroid belt), the supersonic parachute that landed the Curiosity rover on Mars, and the Cold Atom Laboratory, an atomic physics facility on board the International Space Station.

She received her MS and PhD in Aerospace Engineering from the University of Southern California. In her spare time she is active in disaster relief operations as a member of the Civil Air Patrol. In her free time she is a sport motorcyclist, scuba diver, mountain biker, and science communicator.

She's done some fascinating things in her career with an imagination sparked by her exposure to scifi and the adventures of Spock — from science fiction to science fact at warp speed, you'll be inspired by her real life science engineering experience in this fascinating keynote.